Although the 2008/09 season was the first to endure the economic downturn, the average orchestra executive didn’t experience an adverse impact on their compensation. In fact, the average compensation level increased 5.43 percent… 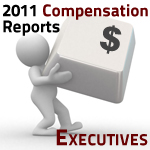 Thanks to the use of dynamic sorting tables, the 2001 Orchestra Compensation Reports can combine and display all of the data from both ICSOM and ROPA executives in a single chart. This means you can interact with the data and arrange it in a variety of ways; high/low compensation figures, total expenditure, conference or group, alphabetic by name, etc.

In order to provide information that is as accurate as possible, data from the 2008/09 season is gathered from the following sources:

It is important to remember that the numbers shown do not always convey a complete compensation picture. For example, an orchestra executive may have had a large increase in salary due to a contractually mandatory severance or deferred compensation package. Additionally, if any executive was not employed for a full season, the documents used to gather this data do not indicate how much of the season the individual received a salary. As such, the cumulative compensation may artificially inflate annual earnings. Conversely, reported figures may not reflect bonuses or other incentive payments and may therefore under report what executives actually earn; as a result, the cumulative compensation for executive directors may or may not be more than what is listed.

2384 min
X
2011 Compensation Reports: Music DirectorsCompensation ReportsWe all know that the 2008/09 season was the first to endure the brunt of the economic downturn but that doesn't mean the average music director didn't…
Send this to a friend