A bit of promotional cross-pollination today in that I’m very pleased to report that Scanning The Dial introduced a new co-author this week: Emily Kurlinski. Emily lives, eats, breathes, and sleeps radio and music in Chattanooga, TN and she joins veteran classical music radio blogger Marty Ronish as the third co-author since the blog was launched in March, 2008. 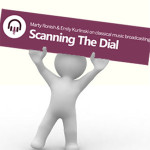 You can check out Emily’s inaugural post, Reinventing Delmarva Public Radio, from 11/12/13 and learn more about her skills and credentials at her about page.

Personally, I’m thrilled to see a new voice join the blog as the entire field of classical music radio is not only fascinating but an integral part of the larger classical music ecosystem. And like other elements, it has suffered since the downturn but just like any ecosystem, the impact of losing an entire species, or even watching it dip to the endangered list, will have dire consequences.

As such, do yourself a favor and start following Scanning The Dial.

Have you completed Adaptistration’s 2013 Audience Segmentation Survey? If not, you’re missing out on the opportunity to shape this blog’s future! Complete the brief survey today.
FacebookLinkedInEmailCopyPrint