The 2012/13 season continued the overall field-wide trend of heated labor disputes; the Minnesota Orchestra went dark for the entire season while the St. Paul Chamber Orchestra lost most of their season and the Indianapolis Symphony had a shorter, but equally bitter, shutdown. When combined with a higher than normal number of partial year compensation entries among the higher budget orchestras, expanded efforts become necessary in order to process data that reflected real compensation trends. 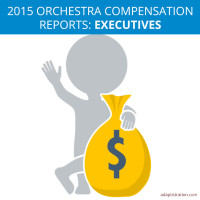 For example, the CEOs in Dallas, New York, and Pittsburgh all went without a full season CEO and with those positions historically in the Top 10 highest paid positions, it contributed to an artificial drop in average compensation figures. This was exacerbated with a string of open, interim, and/or partial season CEO positions in St. Paul, Oregon, New Jersey, Jacksonville, Indianapolis, Memphis, Hartford, and Charlotte.

Consequently, the face value change in average compensation from 2011/12 to 2012/13 season was a -4.65 percent decrease; but when adjusted for those unfilled, interim, and partial season anomalies, the difference was a negligible -0.28 percent decrease. In the end, the latter figure is far more accurate and indicates that orchestra executive compensation held steady for this season.

When compared to the -6.55 percent drop in average Total Expenditures, the null growth in executive compensation looks pretty good.

In order to provide information that is as accurate as possible, info from the 2012/13 season is gathered from the following sources:

What The Data Doesn’t Show

It is important to remember that the numbers shown do not always convey a complete compensation picture. For example, an executive director may have had a large increase in salary due to a severance or deferred compensation package owed when the position was vacated. Additionally, the documents used to gather data do not indicate how much of the season an individual received a salary. As such, the cumulative compensation may artificially inflate annual earnings. Conversely, reported figures may not reflect bonuses or other incentive payments, therefore underreporting what executives may actually earn. As such, the cumulative compensation executives may or may not be more than what is listed.

For additional details about any individual executive’s compensation in any given season, you should review the respective IRS Form 990 for any statements, notes, and/or addendums provided by the organization to explain compensation abnormalities.

Although LA Philharmonic’s CEO, Deborah Borda, continues to push the heights of executive compensation higher each year, it is worth noting that she is the only larger budget orchestra executive to earn more than the music director. None of her peers even come close to earning what their respective music directors are compensated:

The largest percent increases in executive compensation are intriguing as well; although some are expected, such as Dayton Philharmonic’s 24.69 percent increase due to the institution’s merger with several peer arts organizations resulting in a much larger overall budget and responsibilities, others include an odd mix of organizations that managed to emerge from financial and/or artistic instability alongside others that continued along those less stable trajectories.

For example, the CEO’s in San Antonio, Milwaukee, Cincinnati, Dayton, and Utah all received increases in excess of twenty percent and all but two of those groups have turned over CEO’s since the 2012/13 season.