Let me guess, you’re between 35-55 years old, male, Caucasian, do not have children, are well educated, are at the high end of the IRS 25% tax bracket, and reside in one of five states with the most electoral college delegates. At least that’s how the data from the 2009 Readership Segmentation Study describes the average Adaptistration reader…

For those of you that didn’t take the survey, it consisted of 36 questions divided into four sections designed to gather detailed information about:

Not only is the data valuable for all culture bloggers but it serves as the first step for performing arts organizations to begin understanding and articulating the benefits of becoming involved in the field of culture blogging. In general, blogs of all variety have created deep-seated and unique relationships with readers and there’s no reason to believe this same potential doesn’t apply to performing arts organizations. Since many of the questions were designed to produce as much comprehensive data as possible, we’ll publicly examine the figures section by section in order to present as comprehensive a picture as possible.

QUESTIONS: WHAT ARE YOUR AGE AND SEX? 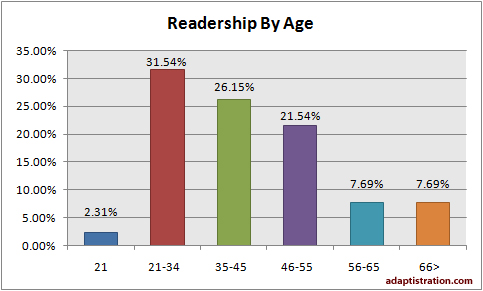 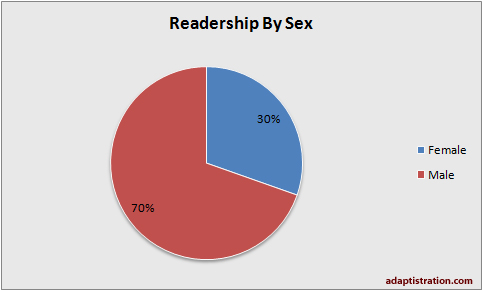 Interestingly enough, the basic demographic results are more or less corroborated by the major website traffic monitors like Google Analytics, sitemeter, and Quantcast. Although the single largest demographic is the 21-34 group, the 35-45 and 46-55 groups comprise half of all respondents. There’s nothing surprising here via demographics although it is interesting to see such a lopsided ratio between male and female respondents. Granted, most internet usage surveys over the past year show that men use the internet more frequently and for longer periods of time than women but given that women occupy a large ratio of this business (managers, musicians, and patrons alike) I initially suspected the ratio to be much closer.

QUESTION: WHICH STATE DO YOU LIVE?

Results from this question were intriguing. On one hand, it is no surprise that states with larger populations and numbers of professional orchestras generated greater numbers of respondents but I was surprised to see such a large number of Non US visitors. Although regular statistics tracking indicates a similar percentage of Non US visitors, that data can never be entirely trusted since domestic visitors can sometimes be routed through foreign servers and there is always a certain percentage of traffic originating from “spam countries.”

Nevertheless, it is very encouraging to see such a large percentage of Non US readers taking the time to complete the survey. Furthermore, 64.28 percent of Non US respondents identified themselves as an orchestra manager or board member so this may be a good indication that other countries are interested in the nuts and bolts of US based orchestra management.

QUESTIONS: WHAT ARE YOUR RACE, HOUSEHOLD SIZE, ANNUAL FAMILY INCOME, AND LEVEL OF EDUCATION? 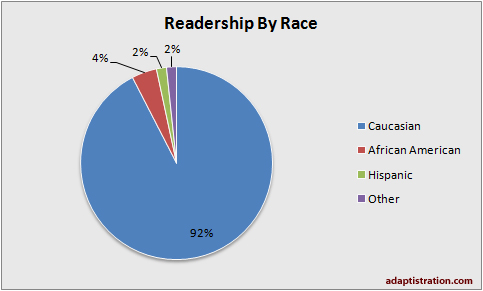 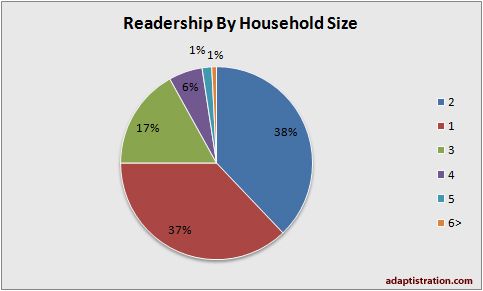 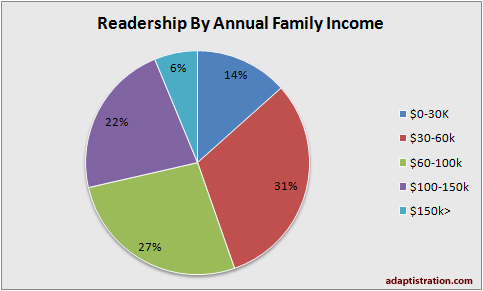 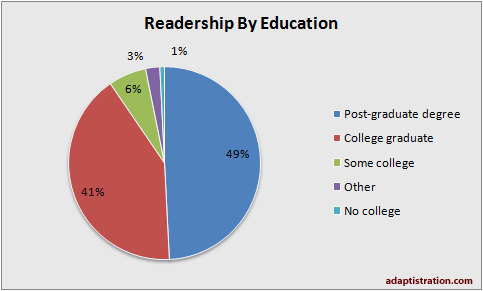 These results produced no real surprises. They merely indicate that people without children or other dependants have more time to use the internet. It also confirms other studies indicating that those involved with the performing arts have higher levels of education and are scattered across the middle class.

QUESTION: SELECT THE PLATFORMS YOU USE TO ACCESS THE WEB: 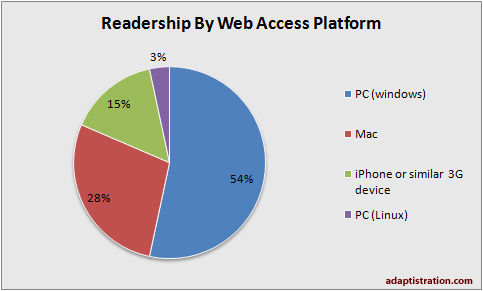 One big change in web access technology since the previous Readership Segmentation Survey is the rise in popularity of web enabled smartphones such as iPhones and Blackberrys. Interestingly enough, the ratio between Windows, Mac, and Linux operating systems indicated here is nearly identical to what the statistics tracking services report. However, none of those services indicate if visitors are using smartphones; as such, cross tabulating the results produced some valuable additional data. For example, out of those who use smartphones, 40 percent belong to the 21-34 demographic, 35 percent to the 35-45 and 46-55 demographics, and 21 percent to the 56-65 and 66> demographics.

QUESTION: SELECT THE OPTION(S) THAT BEST DESCRIBES YOUR RELATIONSHIP TO THE PERFORMING ARTS: 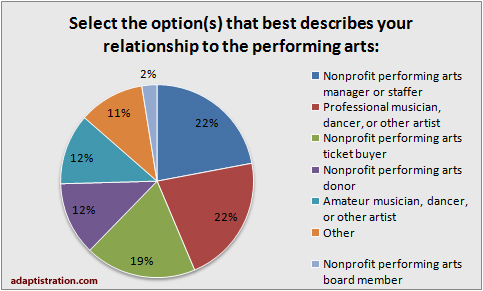 In the last Readership Segmentation Survey, this question included fewer options which ultimately grouped readers into the three basic orchestra stakeholder categories: Governance (managers and board members), Artists (instrumentalists and singers), and Patrons. The ratio between each group of stakeholders was a nearly perfect three-way split. Although the expanded data in this survey is enormously useful, when these responses were merged into the same three stakeholder categories, the ratio was once again evenly divided: Governance = 33 percent, Artists = 35 percent, and Patrons = 32 percent.

Another intriguing discovery that came to light after some cross tabulating is the percentage of younger readers who identified themselves as ticket buyers. The chart to your right illustrates the spike in the 21-34 demographic that identified themselves as ticket buyers over other demographics. More to the point, even when combined, the older demographics of 56-65 and 66> only amounted to half of 21-34 respondents.

When cross tabulating these results with respondent location, the majority of those identified with Governance are located outside the US, New York, Texas, Maryland, Ohio, Pennsylvania, and Virginia. Artists are predominantly located in Illinois, Texas, California, Ohio, New York, North Carolina, Tennessee, Utah, and outside the US while Patrons are predominantly located in Texas, Ohio, Pennsylvania, California, Illinois, Indiana, Minnesota, and outside US. The ratio for each stakeholder location is illustrated in the chart to your right.

Based on the information above, it seems reasonable to formulate the following observations:

If nothing else, the data helps to formulate additional questions; some of which may be examined later this year or in next year’s annual survey. In the meantime, what are your observations? Did you see something besides what is mentioned above? Do you disagree with these observations? Are you beginning to formulate a hypothesis? Can you identify areas where this information can be useful? The more discussion, the better so post a comment below or send in an email.

Thanks to all of the readers who took the time to complete the 2009 Readership Segmentation Survey. Tomorrow’s article will examine media and culture habits along with blogging and online habits. These sections produced some of the most fascinating and constructive data from the entire survey and will likely serve as some of the most useful information for other cultural bloggers and arts managers.