The internet was alive with outrage since the trio Time for Three posted a video on YouTube protesting their treatment at the hands of a US Airlines regional carrier. Apparently, two of the three members were traveling from Charlotte, NC to Fayetteville, AK when the aircraft’s captain allegedly told the two violinists that FAA regulations “prohibited musical instruments to be carried on the plane.” As it turns out, that’s just about as far from accurate as possible (it will be interesting to see how US Air deals with this) but there are still a few catches musicians and their employers should be aware of. 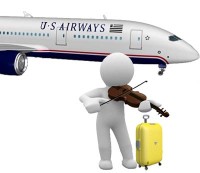 The FAA Modernization And Reform Act Of 2012 (pdf) stipulates that air carriers can not universally prohibit passengers from carrying small instruments as carry-on baggage. At the same time, the small instrument statement contains an “if” provision worth noting.

a) In General – Subchapter I of chapter 417 is amended by adding at the end the following:

(1) SMALL INSTRUMENTS AS CARRY-ON BAGGAGE. – An air carrier providing air transportation shall permit a passenger to carry a violin, guitar, or other musical instrument in their aircraft cabin, without charging the passenger a fee in addition to any standard fee that carrier may require for comparable carry-on baggage, if-

(A) the instrument can be stowed safely in a suitable baggage compartment in the aircraft cabin or under a passenger seat, in accordance with the requirements for carriage of carry-on baggage or cargo established by the Administrator; and

(B) there is space for such stowage at the time the passenger boards the aircraft.

In Time for Three’s case, it appears that the “if” conditions were not present in their situation but having said that, the “if” provisions should be quite clear: if the overhead is full or your case doesn’t fit, you are SOL.

Consequently, the smart move for musicians and their employers here is to maximize the favorable change in regulations by ensuring early boarding via purchasing early boarding upgrades (which many airlines now sell as a way to nickel-and-dime passengers) or acquire elevated passenger status, the latter of which can be accomplished by accruing a certain level of travel miles over a given period of time or by purchasing the membership, either directly from the airline or via a related credit card program.

This should help prevent any anxiety over item a.1.B. but there’s not much else that can be done about a.1.A. if airlines decide to continue reducing the size of overhead compartments or completely remove them.

It will be fascinating to see how much confusion and frustration ensue if most major air carriers follow the lead of Frontier and begin charging a standard fee to place a bag in the overhead bin.

Granted, I don’t envy any airline employee tasked with enforcing and verifying that gem of a rule, nonetheless, the potential for conflict among airline employees and musicians with small instruments is even higher in those instances, especially when something like Frontier’s revenue generating policy intersects with Sec. 403.

For the time being, it appears that so long as airlines charge all passengers a fee to use the overhead bins, musicians with small instruments won’t be able to use Sec. 403 to avoid paying it.

In the meantime, you can check out Time for Three’s protest video via tri member Nicolas Kendall’s YouTube account.

*A No-Goodnik Fiddle Ruffian is recognizable by the propensity to perform unaccompanied works by the masters in hazardous spaces as an act of defiance while adorned in popular urban fashions such as hoodies, athletic sportswear (albeit dubious intent for engaging in said athletic activity) and backward base ball caps while simultaneously maintaining a high hair-to-product ratio and waggish facial hair.