One of the best things about getting in on the ground floor is there never seems to be any limit on where you can go. For example, since 2010 Adaptistration brought an official editorial cartoonist on board and increased overall visits by a whopping
61.98 percent. If fact, we had to upgrade our server to accommodate the traffic and it’s looking like another upgrade will be necessary before the calendar year is out!

But perhaps one of the most exciting aspects was the largest evolutionary leap forward in the blog’s history: creating an interconnected network of sites.

Thanks to advancements in the WordPress publishing platform since last year, creating and managing a network of sites is easier than ever. Add to that a steadily growing series of regularly occurring events and resources and the tipping point for expanding into a full-fledged network of publishing outlets is crossed.

In Adaptistration’s case, it gave birth to the Adaptistration Network; a collection of five dedicated outlets focusing on different aspects of the classical music field: the original blog, a subscription resource site, a cartoon strip, a free jobs board, and an outreach resource center. You can find links to each site in the navigation menu of each outlet. 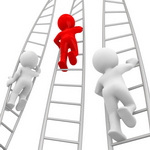 It should come as no surprise that the most popular articles this past year have ping-ponged between annual favorites such as the compensation reports and current event related issues from labor dispute hot spots in Detroit, Philly, and Louisville. In addition to those topics, articles making it into the Top 20 include the orchestra governance essays, the ICSOM rant against defeatist attitudes, and a series of posts taking the steam out of the Chicken Little Think Tank.

The only usual suspect missing from this year’s top content list is the annual orchestra website reviews but that’s only because they haven’t been published yet. But don’t worry, they’ve only been delayed so as to coincide with the website related work I’ll be doing at the National Arts Marketing Project Conference next week. You can look forward to the first website review installment next Monday!

IT’S ALL ABOUT YOU

Traffic isn’t the only thing to spike this past year, comments have jumped up as well. There have been as many comments this year alone as the previous two years combined.

What’s worth noting here is the overall tone of comments; they lend themselves toward productive discussion. I’ve been enforcing a very strict code of conduct for comments over the past year and on many occasions, I’ve written to comment authors asking them to consider submitting a revised version of their comment that confirms to the official comment policy while still focusing on their primary point.

In the world of blogging this is usually a death sentence; you don’t suggest to readers that they might be behaving in a rash or trollish fashion. But kudos to Adaptistration readers since by and large, the majority are more than happy to take their own time to consider the advice and resubmit their comment.

It’s helped produce not only an unusually civil tone surrounding emotion fueled topics but a truly unique environment among the growing world of culture bloggers where comment threads tend to move toward one sided, extreme views. In that sense, Adaptistration remains as one of the truly independent outlets focused on this field.

Another wonderful trend has been an increase in the number of question oriented comments. Not only are readers asking me questions but they are questioning one another in a way that adds to the overall meaningful tone of most threads. Of course, that doesn’t mean folks don’t disagree, there’s plenty of conflict but it rarely goes overboard into something ugly.

In the end, it’s all about the readers; without you, all of this is just digital dust. So please accept my thanks for your patronage, it’s an honor to be read by such a diverse group of readers who care about and are interested in the business end of classical music.