On 1/19/2015, Robert Levine and I discussed the implications of the 2014 Minnesota Orchestra collective bargaining agreement (CBA) provision that established a substitute musician per service rate at 90% of their full-time colleagues. The equal pay for equal work oriented discussion was streamed live on SoundNotion.TV at 10:00am ET and moderated by SN’s David MacDonald and Sam Merciers. 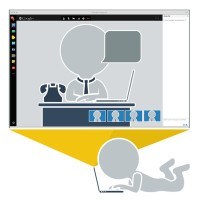 I am grateful to both MacDonald and Merciers for not only taking the time to facilitate the discussion but for also rising to the challenges related to moderating such a sensitive issue. Likewise, I am equally appreciative that Levine accepted my invitation to conduct a live video conversation hosted at SN for what has been unfolding as an online exchange via our respective blogs.

My apologies to everyone for not making the live stream known in advance but all parties managed to pull the idea together in remarkably short order and as a result, the details weren’t finalized until shortly before the conversation was underway.

For those who have been following this topic, this moderated and refreshingly frank discussion goes a very long way toward filling in many of the gaps that exist in recent public discourse while simultaneously remaining very focused on the issues at hand. You can watch the archived video at SN’s YouTube channel as well as the copy below.

In addition to the video discussion, SN recorded the after-show conversation in audio format and simply put, it’s a must-hear component thanks to an additional layer of candid and thoughtful Q&A. Simply put, MacDonald and Merciers deserve an enormous amount of kudos for their work as hosts and provocateurs; the interviews not only cement their reputation as one of the most influential culture blog platforms introduced in recent years but this discussion has the genuine potential to serve as a catalyst for positive action.

For additional perspective, you can catch up on some the larger discussion points referenced during the video discussion by visiting Levine’s posts (here and here) along with Adaptistration’s entries.

Rest assured, we’ll explore this critical topic in future installments but for now, there’s a good bit to consume and digest via the video and audio offerings.

Up through this point in time, there has been a good bit of emotionally charged conversation on the issue of substitute parity in general and the MN sub disparity in particular, so do yourself a favor and set aside the time to absorb both offerings as they do more than their fair share at keeping the conversation on track.

And once you’ve had a chance to watch and listen, send in your thoughts, observations, and questions via comment or contact. The more transparency and discussion the better and to that end, I’m curious to know what you think.

9 thoughts on “Talking Equal Pay For Equal Work And The MN Substitute Disparity With Robert Levine On SoundNotion.TV”

X
Talking About 2014 Highs And Lows On ‘A Tempo’ With Rachel Katz On WWFM…Lectures & PresentationsI had the pleasure of discussing the highs and lows of 2014 for WWFM 's 1/4/2015 edition of A Tempo with Rachel Katz. We discussed labor disputes at M…

Talking Equal Pay For Equal Work And The MN Substitute Disparity With Robert Levine On SoundNotion.TV

572 min
X
Labor Unrest Continues To Impact RetentionMusician IssuesThere's a fascinating article in the 1/22/2015 edition of ArtsATL.com by Mark Gresham featuring an interview with the Chicago Symphony Orchestra's (CS…